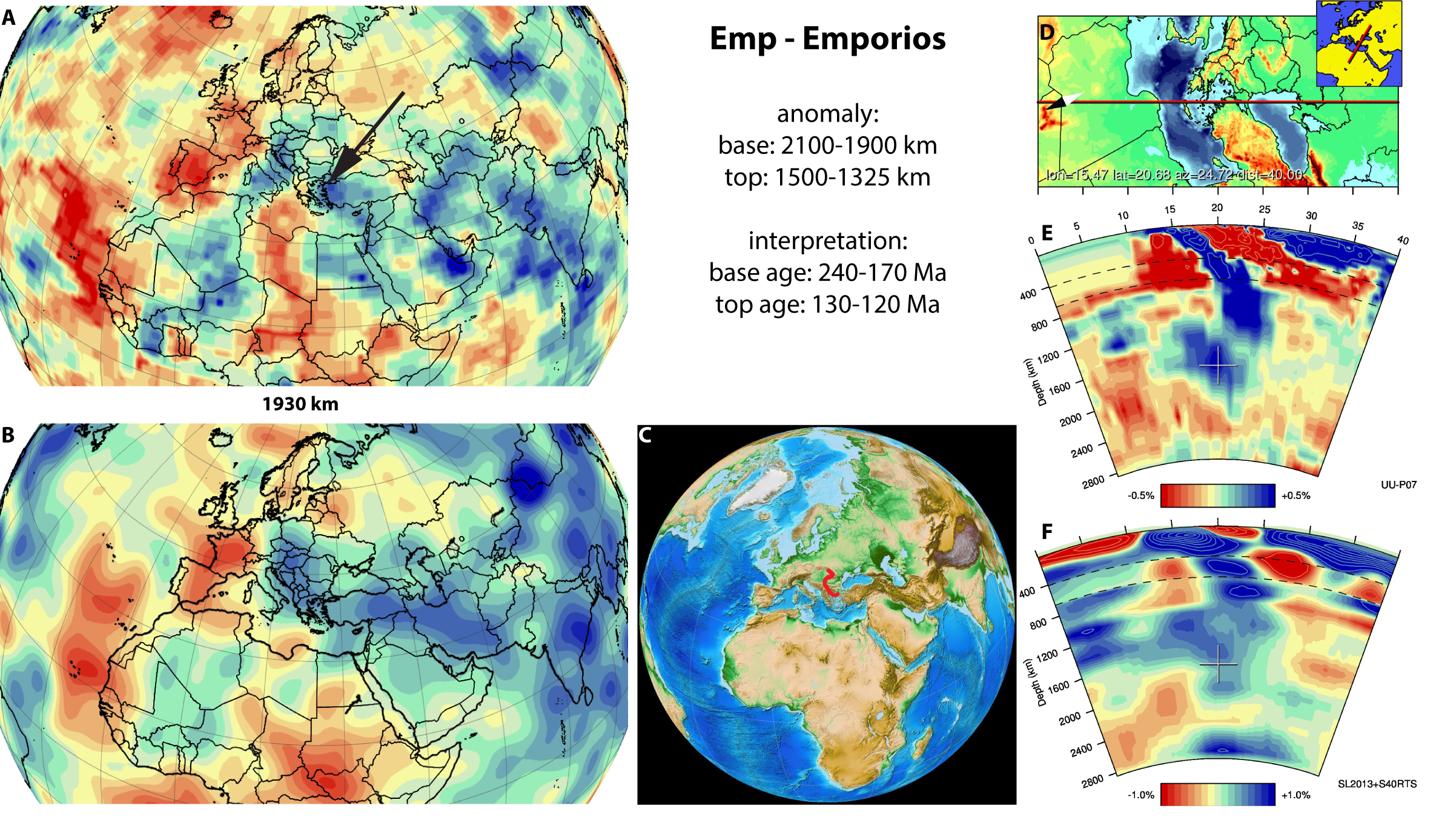 Figure A32. Emporios anomaly, interpreted as the Emporios slab, with (horizontal) [vertical] cross sections through (A)[D] the UUP07 p-wave) and (B)[D] the combined SL2013 and S40RTS s-wave models at 1930 km; C) the location of the modern geological record that we interpret to have formed during the subduction of the slab.

Update March 4, 2018:
The age of the base of the Emporios slab may be considerably older than estimated in the original publication of the Atlas of van der Meer et al. (2018). Originally, we interpreted the base of the Emporios slab by the age of the East Vardar ophiolites of ~170-160 Ma, assuming that these formed during subduction initiation in the Neotethys ocean of the eastern Balkans. Maffione and van Hinsbergen (2018) recently suggested that these ophiolites instead formed above an already long-lived, (south)westward dipping subduction zone that had been consuming the Paleotethys ocean since ~240 Ma, that opened the Neotethys ocean as a back-arc basin. They suggested that the extension that formed the East-Vardar ophiolites was a response to the inversion of the Neotethys ridge at which location the roll-back of the Paleotethys (i.e. Emporios) slab could no longer be accommodated. The volume of the Emporios slab better fits a scenario in which it represents the entire Paleotethys of the Balkan than only a small, short-lived subduction zone in the eastern part of it. Moreover, there is no other slab that may represent the Paleotethys. On the other hand, there is no geological confirmation that the Paleotethys ocean subducted below the East Vardar ophiolites. We have therefore increased the possible range for the base of the Emporios slab from 240-160 instead170-160 Ma.

Text in van der Meer et al., 2018:
The Emporios anomaly (Figure A32) is located in the lower mantle slightly south of, and immediately below the Aegean slab, between 1500 and 2000 km. The name derives from a village on the island of Chios, Greece, which is located above the center point of the slab. Previously, van der Meer et al. (2010) followed the interpretation of van Hinsbergen et al. (2005) that the Emporios slab represents Jurassic to Early Cretaceous intra-oceanic (north)eastward dipping subduction within the western part of the Neotethys culminating in ophiolite obduction of the Hellenic and Albanides ophiolites (e.g. Othris, Pindos and Mirdita ophiolites) in the Early Cretaceous (~130 Ma ago) – now known as the ‘west-Vardar ophiolites’ of Schmid et al. (2008). Stampfli and Borel (2004) and Schmid et al. (2008), and more recently Jahn-Awe et al. (2010) and Natal’in et al. (2012), however, pointed out that two Jurassic-Early Cretaceous intra-oceanic subduction zones existed in the Vardar ocean, not only emplacing the west-Vardar, but also the East-Vardar ophiolites. The latter were thrusted onto the fringes of the Moesian platform (i.e. onto the circum-Rhodope units and Biga peninsula) It is more likely that the slab present below, and slightly south of the Aegean slab is associated with southward subduction below the east Vardar ophiolites instead. The age of onset of subduction is similar to that previously inferred, and is occurred ~170 Ma ago as shown by the oldest ages of the supra-subduction zone ophiolitic crust of the northeast Aegean ophiolites (e.g., Guevgueli, Samothraki, and Sithonia ophiolites (Magganas et al., 1991; Robertson, 2002; Koglin et al., 2009). The age of the top of the slab is likely somewhat older than the age of the base of the Aegean slab, for which we inferred an age of 110±10 Ma. The west-Vardar slab should be found farther to the west (here interpreted as the Algeria slab).