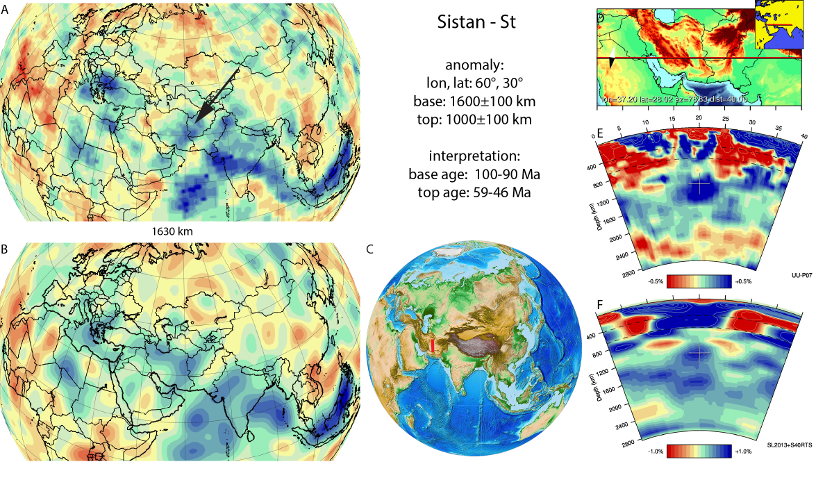 Figure A81. Sistan anomaly, interpreted as the Sistan slab, with (horizontal) [vertical] cross sections through (A)[D] the UUP07 p-wave) and (B)[D] the combined SL2013 and S40RTS s-wave models at 1630 km; C) the location of the modern geological record that we interpret to have formed during the subduction of the slab.

The Sistan anomaly (Figure A81) is a N-S striking anomaly below eastern Iran and western Afghanistan in the upper part of the lower mantle. Given its orientation, its position to the west of the India slab, northeast of the Mesopotamia slab and northwest of the Carlsberg slab, the Sistan anomaly is best explained by subduction that terminated with the formation of the Sistan suture that currently still overlies this slab. The Sistan suture is N-S trending and separates the Lut Block of central Iran and the Helmand Block of Afghanistan (Camp and Griffis, 1982; Tirrul et al., 1983). This suture formed at the expense of an Early Cretaceous oceanic basin (Babazadeh and De Wever, 2004) that was in an overriding plate position relative to the Mesopotamia slab.Eclogite and blueschist rocks in melanges of the Sistan suture (Fotoohi Rad et al., 2005) were originally suggested to have formed in Early Cretaceous time (~125 Ma) based on 40Ar/39Ar thermochronology with large age uncertainties of more than 10 Myr (Fotoohi Rad et al., 2009). A recent re-dating of these rocks by 40Ar/39Ar, Rb/Sr and U/Pb geothermochronology was not able to reproduce these Early Cretaceous ages and rather produced a tight clustering of ages between 83 and 89 Ma (Bröcker et al., 2013), by which time subduction must have been underway to produce pressures in excess of 20 kbar (Fotoohi Rad et al., 2005). Given the stratigraphic ages of Albian-Aptian in the HP mélange of the Sistan suture (~125-100 Ma) we adopt an onset of subduction of the Sistan Ocean of 100-90 Ma. An ~59 Ma granite in the Sistan suture has a geochemistry consistent with arc magmatism (Delavari et al., 2014), ~46-25 Ma magmatism in the area is interpreted as post-collisional, perhaps reflecting delamination and asthenospheric inflow that may have been triggered by slab break-off (Rezaei-Kahkhaei et al., 2010; Pang et al., 2013; Mohammadi et al., 2016). We adopt a 59-46 Ma end of the subduction of the Sistan slab